What students know about the war in Ukraine 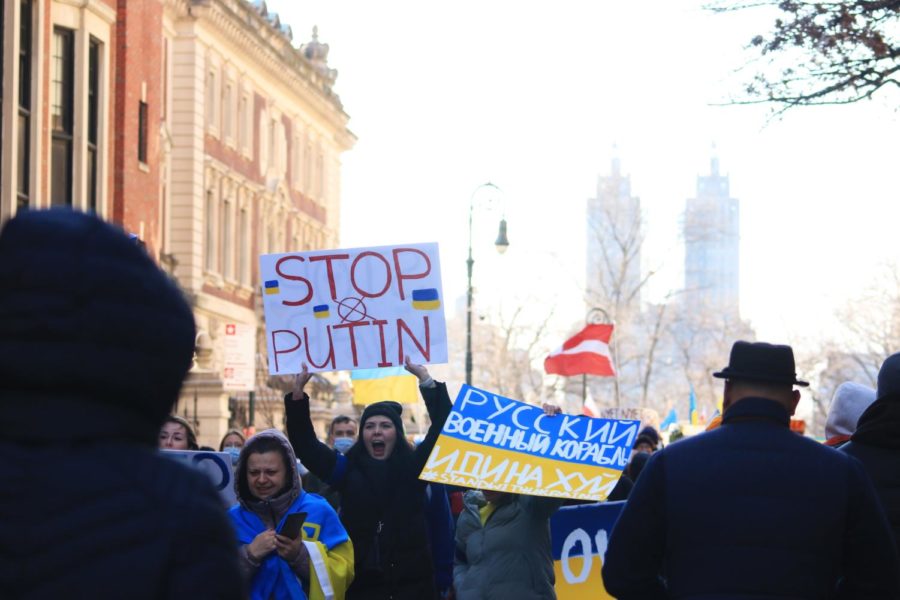 Russia’s invasion of Ukraine continues to make global headlines. Social media and various news organizations have been reporting on each passing minute, but how much information is getting to everyday citizens? BHS students shared the extent of their knowledge, along with questions they’d like answered.

To comprehend the war, the first step is to understand Russia and Ukraine’s history and strained relationship.

“I don’t know about the Soviet Union, but we did talk in World History that Ukraine was one of the groups of people who created a new country, like in that 18th century time period when there were a bunch of revolutions in the world,” said Kaelee Wolf.

“After Russia broke up?” asked Noah Ragnoni in response.

Following World War II, Ukraine became a part of the Soviet Union, but the collapse of the government in 1990 allowed the small country to declare sovereignty. Ukraine’s presidency soon became a revolving door, with many of the leaders not being elected for a second term, and each having wildly different opinions on how to deal with Russia.

In 2014, the former Ukrainian president, Viktor Yanukovych, began to lessen ties with the European Union and instead met with Russian president, Vladimir Putin, to discuss policies that would strengthen ties between the countries.

Protests erupted throughout Ukraine, with hundreds of thousands participating, naming the revolt, the Revolution of Dignity. A camp was set in Kyiv’s Maidan Square (Independence Square) and after multiple attempts to disband the gathering, Ukrainian security forces opened fire on the crowd, killing at least 100 people and wounding hundreds more.

Yanukovych quickly ordered a snap presidential election and fled the country, while the Russian parliament permitted Putin to use military force in Ukraine.

“They took over Crimea,” said Wolf.

On March 16, Russia gained de facto control of a southern Ukrainian peninsula, Crimea. The region’s local government, under pressure from Russian forces, set up a referendum, a chance for civilians to vote on whether Russia should be allowed to annex Crimea. With reports of armed men standing guard at polling stations, it was no surprise that 95 percent of voters chose to be annexed.

“I remember watching a video about this very large river that Crimea had, and Russia blocked off the river because they wanted all the oil,” said Charles Nomura.

“[During 2014] the world just gave a bunch of sanctions and called it a day. They tried to devastate Russia financially,” said Wolf.

Since 2014, Crimea has been under the control of Russian forces, and tensions stayed high as the years continued. But it wasn’t until the early months of 2022 that the world realized the danger that Russia presented.

Putin’s central rationale for an invasion argued that Ukrainians and Russians are one people and must be united under one nation.

“I know that Russians are from Russia, and Ukrainians are from Ukraine, but otherwise I don’t know that much about it, so I don’t want to make assumptions,” said Tatum Buckley.

Though they both have eastern Slavic roots, many cultural differences can be found when compared.  Throughout Ukraine’s history, it has been home to a large number of immigrants and has had plenty of influence from both Russia and western European nations that border it. Exposure to new ethnic people and traditions has created Ukraine’s distinct cultural legacy, which the Russian government refuses to acknowledge.

Hence, Russian troops began stationing at the border, and on Feb. 24, 2022, Russia officially invaded the independent country of Ukraine. The gruesome details have been covered by both news outlets and social media.

“I’ve seen how [Russia] has been bombing buildings in Ukraine, and people taking shelter,” said Buckley. “I’ve heard so much about gas prices, rather than what is actually happening. It feels like I’ve seen mostly what affects us and how we got involved in it, instead of what is actually going on in the situation.”

The news from Ukraine can be overwhelming, countless civilians and journalists have reported on the conflict, with photos and videos of the destruction accompanying the articles.

As of Mar.  3, 2022, Russia controls the major cities of Luhansk, Donetsk, and Mariupol, while fighting to take hold of Kharkiv, Makariv and the Ukrainian capital of Kyiv. Ukrainian forces have shown immense resistance, and according to the Institute for the Study of War, Russia has lost considerable ground around Kyiv in the last week and has stopped current efforts to encircle the city.

The United States has given more than 1 billion dollars in military aid to Ukraine, and though no other country has officially entered the war, 20,000 foreigners, including 100 Americans, have joined the International Legion for the Territorial Defense of Ukraine, fighting alongside Ukrainian soldiers in the conflict.

Since Feb. 24, 2022, there have been 2,685 civilian casualties, and more than 4 million have fled Ukraine into neighboring countries, including Poland and Romania, according to the UN Refugee Agency.

But among the macabre, there are many stories that show the resilience of the Ukrainian people, and that is what sticks most in the mind of BHS students.

“I saw that really awesome video where a farmer stole a tank. There is just a video of a tractor driving a tank away,” said Wolf.

“I’ve also seen the video of a Ukrainian grandmother giving Russian soldiers sunflower seeds so that when the soldiers died, sunflowers would grow where their bodies were,” said Wolf. “I’ve seen a lot of that.”

The last question to be answered by students was what curiosities they had surrounding the war, and the response was unanimous.

“What are some ways to stay better updated on the situation?” said Nomura.

“Yeah, this is making me realize that I don’t know as much as I thought I did,” said Wolf.

It can be extremely difficult to understand the complexity of the war, but receiving alerts from reliable news organizations, reading published articles, or watching videos reporting on the conflict, are great ways to stay updated and informed on the Russo-Ukrainian War.