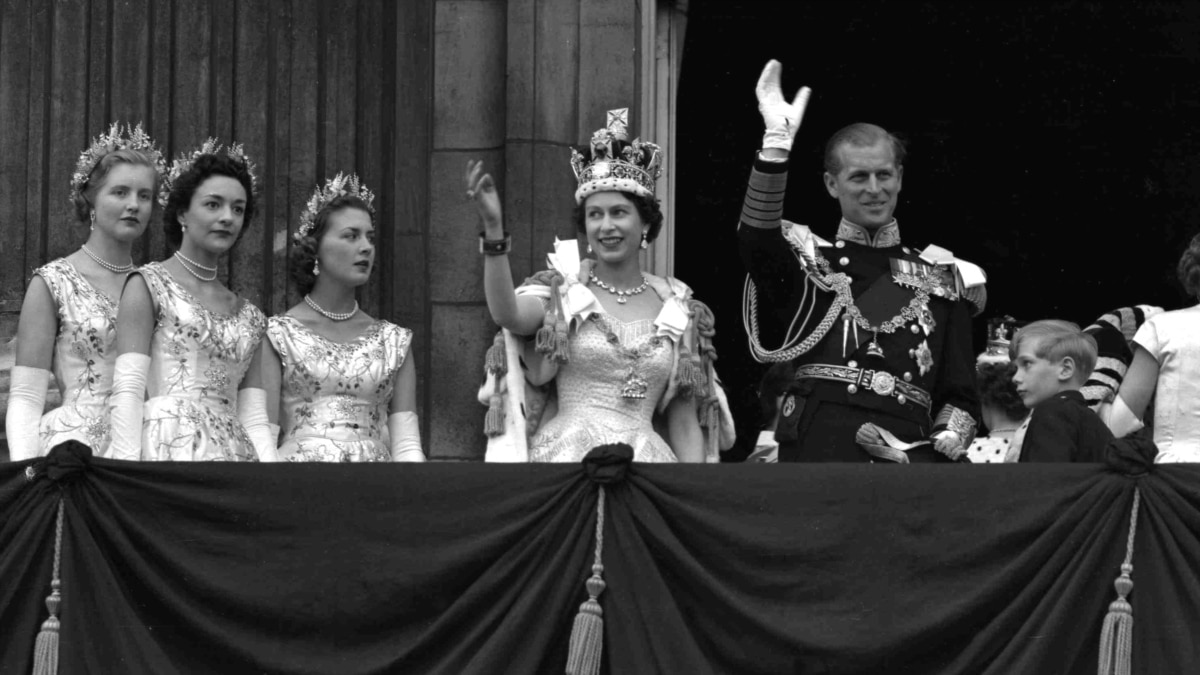 On Sept. 8, 2022, her Majesty, Queen Elizabeth II, passed at her Balmoral Estate in Scotland. Her death is monumental, marking the end of the longest British reign in history, spanning seven decades. But the complicated legacy of Elizabeth has made a spectrum of the world’s reactions, especially in America, as citizens’ emotions range from unspeakable grief to unrestrained joy.

The first difference between the people of Britain and the United States comes from the announcement they received. Many Britons were given the news through the BBC, interruptions on their favorite radio stations or television shows, and even a notice of death outside Buckingham Palace. But the American public had no access to these announcements, thus they were given the information in a multitude of odd ways.

“I learned about it because a student stumbled into our class and told us that the Queen died. So I found out through their outburst,” said junior Charlie Silver.

“I was in the commons when my friend told me,” said senior Brianna Myers. “I didn’t really have a strong reaction because Britain is pretty far removed from what is happening around the Quad Cities.”

Immediate reactions also varied between ages, since Elizabeth had a special kind of internet presence, with the most notable joke being that she was immortal.

“I was in disbelief. She’s been alive for so long, no one really expected her to actually die,” said senior Ian Oliver. “There are so many memes and jokes about how the Queen was invincible or unable to die, and I think that improved the public’s opinion of her but also made her death hurt more.”

Elizabeth II was a stable presence, with many in Britain viewing her as a grandmother figure. But for Americans, the emotional connection isn’t there, and with the internet, criticism from the States became even louder.

“My opinion is that they’re decent people, I mean, they’re not horrible human beings,” said sophomore Katie Baltos. “But the situation with Diana, and the controversy around; was her death a car accident or pre-planned murder? In its entirety, it’s a mess.”

“The British hold the royal family dear to their identity. But they have a lot of money locked up in the British monarchy and think about how well economically they would do if that money was used for other purposes. You don’t need to take all of the monarch’s money, they have personal assets and public assets, so they can go and live off their vast amount of wealth. But in reality, the Parliament would still work just fine without a queen,” said Myers.

The legacy of the British monarchy is quite destructive, as there are only 22 countries they haven’t invaded. Invasions aside, some of the most hurtful histories stem from the former British colonies, many of which are still tied to the British Commonwealth.

“The British monarchy is a representation of past misdealings of their own family or the families before them. Whether it’s colonialism in Africa and the Americas, before that, the enslavement of tens of thousands of people, lots of genocide, those sort of things. It is just the embodiment of past imperialist policy,” said Silver. “It isn’t something that needs to be around now.”

“[Her legacy] affects a lot of people very harshly, there are many people of color in Britain. It really isn’t nice to be racist towards people, and I heard the Queen was really racist,” said freshman Dakota Pepin.

Despite the monarchy’s questionable history, many wonder whether the Queen should be separated from the legacy when in mourning.

“You don’t have to [seperate the two] if you don’t want to. But, because colonialism is an important thing with her legacy, what the monarchy did before her, talking about that is important, even if she’s died,” said Oliver.

But there are some who don’t separate the two entities, leading to harsh comments towards the Queen and an air of offense felt by those in Britain who revered her.

“Some Americans have been slammed on social media and told to ‘show respect’ following a number of disgusting comments about The Queen’s death,” said Matt Spivey, a writer for “MyLondon News.”

“It’s disrespectful to make jokes about a 96-year-old lady dying, in that case,” said Baltos. “But, she does represent the British empire and, by that, British colonialism, just like the kings and queens before her. So I can see where a lot of people are coming from.”
The issues surrounding the monarchy have been put on a stage though, with King Charles III and Queen Consort Camilla assuming the throne. Both royals have been caught in public scandals and controversy, along with difficulties mastering a graceful, indifferent image, made a standard by Elizabeth II.

“On Saturday, the new monarch went viral after a clip showed [King Charles] shooing staff to clear his desk while he signed his accession proclamation. In the footage, the King fans his hand dismissively at an aide to direct the moving of an ink pot,” said Graeme Demianyk, a writer for the “Huffington Post.”

“Parts of their empire will fall,” said Baltos. “I mean, there are talks about Scotland becoming its own country and countries in the Commonwealth leaving. It’s going to be a lot for King Charles.”

The future of the British monarchy is uncertain, as their past continues to haunt the memories of those they harmed, and the word “abolish” repeats in tweets and posts across the internet. But even though the comforting, stable presence of Queen Elizabeth II has passed, the constant complications with her legacy will continue. 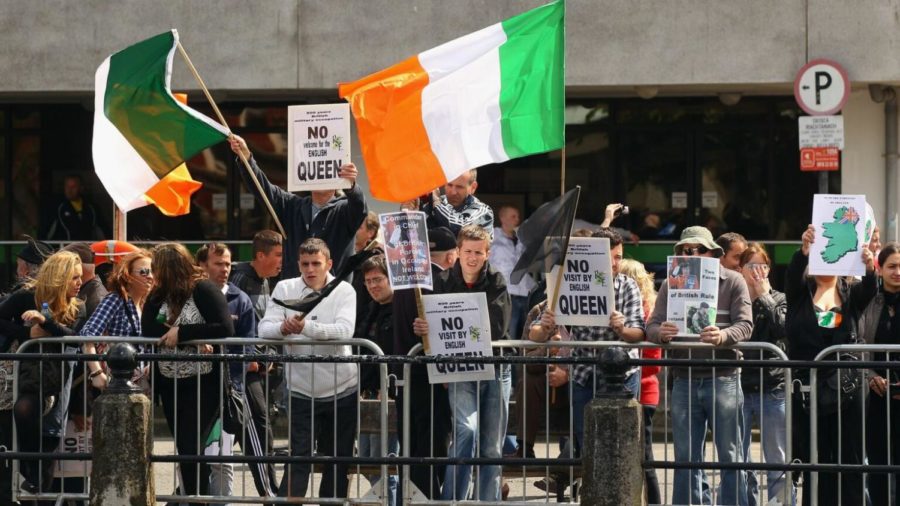 CORK, IRELAND – MAY 20: Protesters demonstrate against the state visit by Queen Elizabeth II as she traveled to English Market on May 20, 2011 in Cork, Ireland. The Duke and Queen’s visit to Ireland was the first by a monarch since 1911. (Photo by Oli Scarff/Getty Images)

Britain is famous for having colonies on every continent, with the exception of Antarctica. But their empire began close to home, as Normans invaded the country of Ireland in 1169, making the land its first colony and reigning over the island for 700 years.

The original sentiment of the occupation was mockery, Ireland made a joke out of the English. And in the wake of Elizabeth II’s death, the Irish population continues to share their generational trauma and dislike for the monarchy through humor on social media, specifically Twitter, Reddit and Tiktok.

“Hey lads, when ye refer to royalty in the future can ye specify a country,” said one Reddit user. “I was saddened to hear of the queen’s passing but when I looked her up she’s still alive and well. Long live Queen Letizia of Spain.”

History plays a large part in Ireland’s disdain for the British, specifically, their monarchy. One of the most significant eras was “The Troubles,” a period spanning from the early 60s to the late 90s in Northern Ireland between Protestants who wanted to stay a part of Britain and Irish Catholics who hoped they’d unite with Ireland; more than 3,500 people died in the conflict, with a ceasefire being confirmed in 1998 and continuing into the present day.

One Reddit user reflected on the previous generation’s sentiments. “Look, all I know is plenty of old folks have been drinking heavily since yesterday, but not cause of mourning.”

In 2011, the Queen became the first English monarch to visit Ireland since 1911. A year later, the royal shook hands with the First Minister of Northern Ireland, Martin McGuinness, a former commander of the Irish Republican Army, a paramilitary group.

The IRA, in protest of the reunification of the two countries, used violent tactics during the Northern Ireland conflict, including killing the Queen’s cousin in 1979.

During a speech at Dublin Castle, Elizabeth II apologized for the treatment Ireland received during England’s reign.

“To all those who have suffered as a consequence of our troubled past, I extend my sincere thoughts and deep sympathy. With the benefit of historical hindsight, we can all see things which we would wish had been done differently or not at all.”

But such sympathies have not sufficed for the Irish Catholic population, a majority of which still believe in the reunification of Ireland.

While under Britain’s rule, the Irish planned countless uprisings, but England’s brutality continued, with one of the most significant events in Irish history being argued as a British genocide. To many in Ireland, the Potato Famine is a symbol of oppression under English rule, a trauma that continues to affect the Irish population both mentally and physically, as several studies have been conducted on the negative famine effects in later generations.

According to a study by the Cold Spring Harbor Laboratory, “What apparently is far less obvious is its impact on the health and wellbeing of Ireland’s surviving population, those who did not themselves succumb to starvation and disease, and who stayed on the island rather than moved abroad,”

“Those born during Ireland’s famine suffered this ecological shock in the most crucial developmental stage in their lives and experienced devastating and often permanent health consequences, ranging from chronic disease to early death.”

In an article by Claire Parker, writer for “The Washington Post,” the mental effect of the British reign is still mentally manifesting.

Anne Marie Quilligan, a social care worker from Ireland’s Limerick region, said the Irish suffer from a sort of “collective trauma.” While Hannah Wanebo, an Irish American lawyer based in Dallas, wrote on Twitter that her Irish grandmother “hated England so much that she would only travel home on flights that did not touch down on English soil.”

With the past still leaving a bitter taste, it isn’t surprising that the joy of the Queen’s death extended beyond the internet. Twitter has shared videos of a crowd of Irish football fans chanting “Lizzie’s in a box,” protesters shoving a casket labeled “The British Empire,” over the railing of a bridge and a museum in Belfast displayed a sign with the words “England is Ireland’s Enemy.”’

Ireland, historically fond of mockery, has continued to share their distaste for the English monarchy, and in turn, the Queen. For the Irish, the legacy of Elizabeth II is directly connected to the awful effects of colonization, thus, many give their condolences to the British public, but do not personally have sympathy for the monarch’s passing.

Yvonne Murray, an English woman who moved to Ireland during the Northern Ireland conflict shared the following: “I often quip you can be anything in Ireland now, as long as it’s not English.”

Donate to The Growl
$0
$500
Contributed
Our Goal
Submitting donation...